Let's dive right in, shall we?

I wonder what on earth Joe Biden was thinking when his presidential campaign reached out to the major television networks, including Fox and CNN.

Take a look at the "demand." 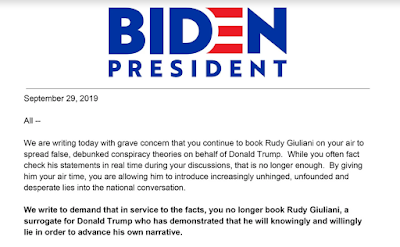 Um, could he really have thought that asking demanding the networks to ignore his accuser was reasonable? This has to be actually literally, not just Joe Biden literally, the dumbest thing I've heard in a long time.

I also have to wonder how 'protected' the folks are at the State Department. On the one hand, Secretary of State Mike Pompeo has blasted the House Foreign Affairs Committee for what he called requests


that can be understood only as an attempt to intimidate, bully, and treat improperly the distinguished professionals of the Department of State.

And I wonder honestly, how Pompeo can look himself in the mirror every day, knowing he works for a president who has not a single iota of respect for the people who work for State? Here's what the president, talking with US diplomatic officials at a private meeting last week, saying


I want to know who’s the person, who’s the person who gave the whistleblower the information? Because that’s close to a spy. You know what we used to do in the old days when we were smart? Right? The spies and treason, we used to handle it a little differently than we do now.

Anyone other than me wondering how he gets away with that?

I also wonder, back to Pompeo now, how he can look himself in the mirror every day, given all of the stuff he said in interviews back in the BENGHAZI! days about Congress having to fully exercise oversight over the executive branch. Here are a few examples:


Our goal is really quite simple. It is to get every single fact we can get, every document, every witness and to put together the puzzle, the mosaic for the American people.

We're going to get all the documents, get all the witnesses, to find out precisely what happened.

We need to make sure that this administration doesn't cover up, doesn't deny, and doesn't withhold.

Yeah, I wonder how he does anything with a straight face. And since I mentioned BENGHAZI! let's transition to Hillary Clinton, and some wondering about her book tour.

I get it - she couldn't have known that there was going to be an impeachment inquiry starting just days before she and Chelsea hit the road, but she has to know that we're in the middle of a Democratic Primary, and that we don't need her to be on the stage talking about why she lost, or policy, or Trump, or impeachment, or about anything other than Gutsy Women.

If you're wondering why I care so much about this, it's simple. The last thing we need is to lose focus on what's important: the actions of the president in putting his personal vendettas ahead of the country's agenda, and steps taken to try and cover that up. Period.

I hope the book is successful, but I don't want it to detract for one second from what really matters. Clinton has no public role to play at this time for the Democratic party or with any of the presidential candidates. She can do what she wants in private, but in public, she needs to be in a booth in a corner in the dark in the back, as my husband says.

What's got you wondering tonight?
From the mind of Sue Drummond