Another jam-packed week of news, sports, weather, and veritable pastiche.

In case you missed anything, here's a recap.

Sunday School this week was all about Cory Booker, because he was the only 2020 Dem hitting a classroom. Most of the question he got had nothing to do with his campaign and everything to do with the current president, impeachment, the former vice president.. you know.  Here's an excerpt about ethics, and Trump.


...I honestly believe this president has not gotten his pound of flesh yet from past grievances on the 2016 investigation. I believe he and his legal team have been looking into this, probably even prior to Joe Biden announcing that he would run for president.

Western New York was in the spotlight in a couple of posts; unfortunately, not in the best light. We had news from the Update Desk on the sad tale of Rep. Chris Collins, the first member of Congress to support the president.

Why did  he resign, you ask? So he could plead guilty to charges in his insider trading case, of course.

The second post was a Quick Take on multiple investigations looking into how things are being done at the WNY Off Track Betting (OTB) office. Not on the gambling end, but on how the Board does business, and who benefits.


New York has a history of good intentions gone bad, and sadly we seem to excel when it comes to situations where public corporations, boards, and authorities are given freedom to do their own thing - because that almost always ends up with politically connected companies and people receiving benefits they are probably not entitled to, or that are way beyond what's reasonable for the work done, and that regular folks have no way to access

In this Poll Watch entry, we learned that, no matter what he tells us, the president is underwater not only on his personal likeability, but also on his policies. He must be reading different polls? 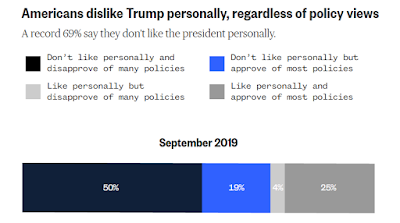 And in a Sidebar on the same poll, the news wasn't all that great for the Democrats' policies, either.  None of their big ideas have strong support from a majority of voters, and they're struggling with Democratic voters, too.


Only a handful of the issues - DREAMers, the Medicare opt-in, student loan forgiveness tied to a repayment plan, and tuition-free college - have strong support from a majority of Dems; all the rest of the issues fall below 50% on the strength of support.

In the blink of an eye,  it was Hump Day, and time for some Wondering about Joe Biden's campaign acting badly, and Mike Pompeo's chest-thumping to protect his employees, even as the president maligns them, and about Hillary Clinton, too, and whether she understands her role these days.


I get it - she couldn't have known that there was going to be an impeachment inquiry starting just days before she and Chelsea hit the road, but she has to know that we're in the middle of a Democratic Primary, and that we don't need her to be on the stage talking about why she lost, or policy, or Trump, or impeachment, or about anything other than Gutsy Women.

The Update Desk was busy this week; in addition to the Collins post, we got caught up with the Democratic candidates via my ongoing social experiment. In addition to counting the emails and the requests for money, I've added a new feature to this: the email of the week, which this time around was sent by Be to O'Rourke's team. Here's a snippet.

Maybe I could do a Facebook live stream with a kitten in hand and say, “You know, we wouldn’t want anything to happen to this kitten now would we… Send your $5 now and Miss Whiskers will be fine.”

To be clear, we’re not planning on harming any kittens. But we do need your help...

And finally, blissfully, TGIF. Among other things, we heard from the candidates on their fundraising efforts for the 3rd quarter.

That's it -- a busy week for sure. I still owe you some poetry, an Albany update, and more. Let's see if I can fit everything in next week!
From the mind of Sue Drummond