It's hard to even contemplate a TGIF post today, so I'm going to take a different approach entirely. 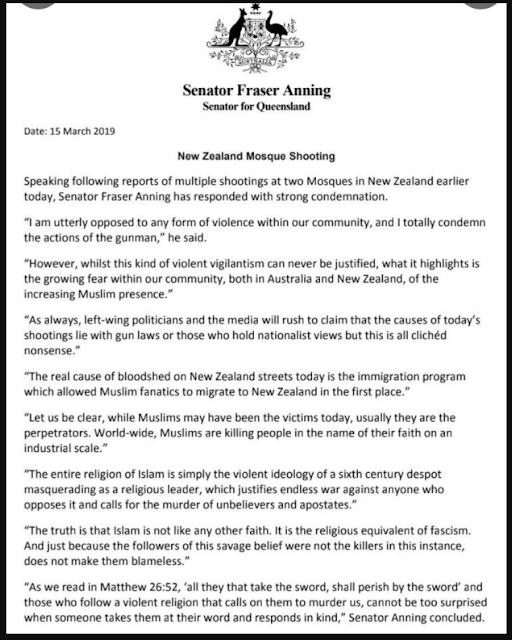 There are so many things about this that turn my stomach, not the least of which is that, if you replaced occurrences of New Zealand with America, it could have been written by any number of people right here in the US.

Any number of national known politicians, their extremist supporters, their minions and surrogates who speak as if for them, if not actually for them, the ones who believe there are good people on both sides, or who lament that white nationalist has become a negative term and who espouse that no matter what, the Judeo-Christian society is the best society ever, all others pale in comparison and only ours is blessed by God, or that anyone who is not white must be biased against them, or that people of color or Muslims or Jews are filthy dogs...

The police officer, the fireman, the head of your favorite local charity, who post racist information on social media and then complain that it was meant to be private, not public - while at the same time saying that what they posted doesn't represent what they think...

Because when a person shares something like this, it does represent what they think, unless it is expressly stated that it doesn't, at the time it's posted - not later, when it's discovered by someone outside the original intended audience.

Unequivocally, the statement by the Australian politician does not represent what I think or believe, and I'm deeply offended by it.

I'm sharing it because I want to remind people who think that this is all harmless, or all in good fun, or just a joke, or not really what they mean to understand that it is really harmful, is not at all meant in good fun, is not a joke, and, honestly, it is what people who say this really mean.

From the mind of Sue Drummond